It’s finally here. The day of my very first infusion, the very first step in stopping the progression of my MS.

I will admit that the past couple of weeks leading up to today were not easy. I had my ups and downs…. more like mostly downs being in a constant battle with my ever loving best friend anxiety. I just had to keep reminding myself that this was something GOOD and that it would all be fine and that I would survive.

I arrived at the clinic for 9am, checked in and the nurse got me all sorted out. I started out with taking Benadryl to help prevent against any reactions and side effects, and took some Advil, and Ranitidine which is another antihistamine to help prevent side effects. After I took those, my nurse put the IV into my left arm, and then put some salt water solution in to make sure the path was clear and was actually going into my system. Once she administered the salt water, I could actually taste it which was very interesting and a bit gross. After that she administered a steroid to again help prevent any and all side effects of the drug. Once the steroid bag was empty, I had to wait fifteen minutes until we started administering the drug. 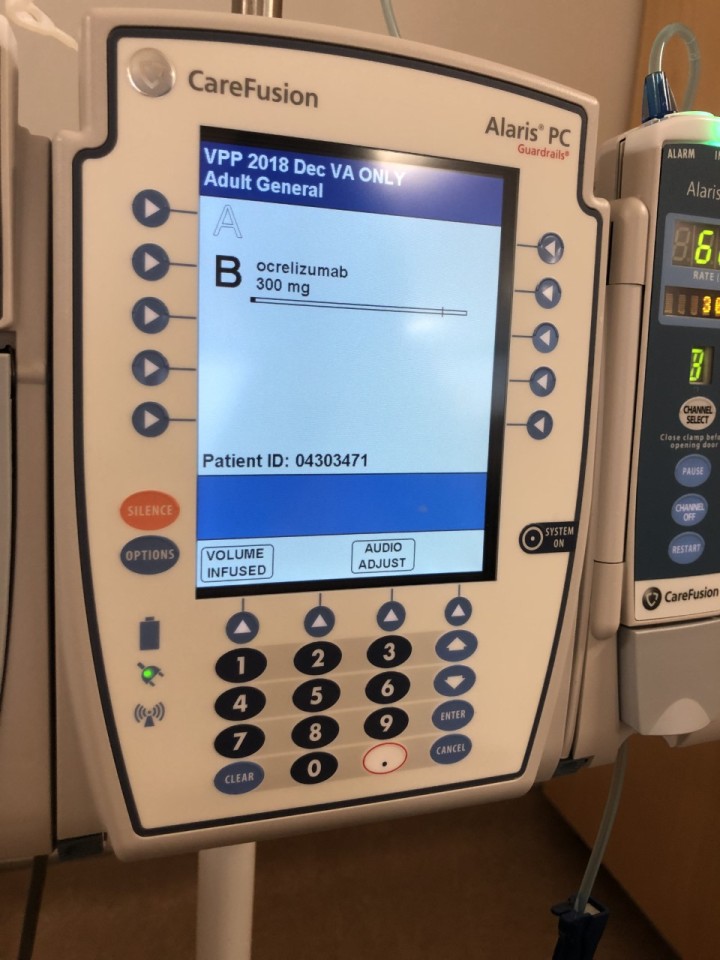 The drug I decided on taking is called Ocrelizumab or Ocrevus for short and easier to pronounce. It is an infusion related drug, (which I’m sure you gathered from the title of this post) and I get it every six months except for the first time. The very first time you get it, you come in and only get half of the normal amount so that it gets introduced into your system in a smaller dose. Since you only get 300mg and the full dose is 600mg, you go back two weeks after your first appointment to get the second 300mg and then after that, it’s every six months of the full dose.

The drug starts at 30ml per hour so essentially a shot glass amount per hour, is what the nurse told me. Every 30 mins I had my blood pressure and heart rate tested and then I used a thermometer to check my own temperature, as well as the nurse would up the amount of the drug going through the IV in 30ml increments. It tops out at 180ml per hour. My nurse said it goes that way and starts slow in order to catch any sort of side effect or reaction to the drug. For example I could be fine getting 90ml but then as soon as it goes up to 120ml I could start getting a reaction and then the nurse would put it back down to 90ml and keep it there until the bag emptied.

After the bag has emptied the nurse detached me from the IV machine and then I had to wait for an hour to be monitored just in case anything were to happen after the fact. After the hour was up, I was allowed to head home.

Once I got home I had a 3 hour nap because I was wiped from 1) my anxiety being at an all time high and 2) the amount of Benadryl that I was given to help prevent reactions. I took some time off of work as it was suggested because everyone reacts differently to this medication, I was extremely lethargic for the first couple days after the infusion and then slowly got more and more energy as the days went on and was back to work.

It’s been two weeks since my first infusion and one day since my second infusion. Yesterdays infusion went the exact same as the first one, which was good. I had half the amount of anxiety going into that when then the first one lemme tell you. So now I don’t go back until the end of July to get my next treatment which is a nice little relief that I don’t have to think about it for a good while.

Overall everything went a lot better than I expected, with just felt extremely tired after both infusions which is apparently normal so that was good to hear from the nurse. The one thing I am looking forward to now is that I don’t have to think about it for the next six months, which will be somewhat of a relief.

One thought on “The one with the first infusion.”